So, if you haven’t heard of the term “spaz-attack” before, it was a term we used as kids to describe someone who’s body movements were comical or “off centre”. This mainly referred to a situation where kids were playing team sports and there was always that one kid who just could not catch the ball, pass the ball, hit the ball or run where they were supposed to. Or even that kid that couldn’t run 100 metres without tripping over, frequently at the entertainment of everyone watching.

Before the medical term “dyspraxia”, Sol’s condition was known as “Clumsy Child Syndrome”. Just let that sink in…..So much negative connotation with that but also, not enough information on all the ways dyspraxia can affect an individual. One of the best short YouTube videos I found early on that helped to describe Sol’s challenges to teachers, sports coaches and specialists that would be working with him, was this: What is Dyspraxia?

There were usually TWO kinds of outcomes for the kids that lived this every day.   1)  the kid that started to shrink away from physical activity that would expose their incompetence to preserve any shred of self esteem they had left 2)  that kid that relished in the attention and was able to turn their frequent faux pas into a comic show. I feel like Sol hovers between the two right now.

When Sol was 6 weeks old, we started him swimming. 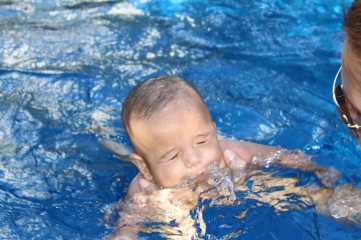 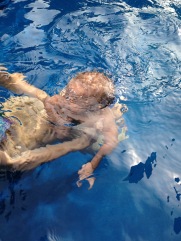 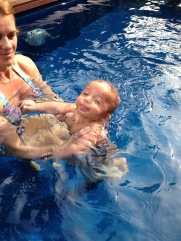 After an early diagnosis for Delayed Visual Maturation, we learnt that swimming would be particularly beneficial for his brain development and physical co-ordination. This has been an activity that Sol continues to this day. Sol has had some really great swim coaches who provide him with the empathy and guidance that he needs to become a competent swimmer but more importantly, retain self confidence which is vital when living with a diagnosed challenge.

I will admit, I find it tough to accept that Sol isn’t playing football or rugby with his age group peers right now. Granted we are in 2020 (sounds like COVID-19) and there are no organised kids sports running, he isn’t missing out. Sol did play after school football last year and really enjoyed it but I could see he would get frustrated when he missed the ball or wasn’t sure where he needed to be on the field. His coaches were so great and inclusive that Sol would show up every week without a grumble, so I knew that despite his co-ordination and spatial challenges, he felt good about being there.

Right now, Sol is BIG on basketball. And, I gotta say, he’s pretty good. IF and WHEN we can get him on a basketball court, this might be the sport for him! We have been challenging him to bounce 100 bounces while counting to 100 – this helps with his focus, co-ordination AND math. Multi-tasking is a really hard thing to do for someone with dyspraxia but he can do it!

One of the most well known sports personalities that has been diagnosed with dyspraxia is Ellis Genge who played rugby for the England Rugby Team. You can tell from the video that not being diagnosed at an early age affected how he felt about himself but in the end, sport saved him: Ellis Genge Rugby Player.

AND I can’t wrap up this post without giving a HUGE shout out to our friends Marissa and Rafael who run Movimento Capoeira Academy for gifting Sol the the joy of movement, martial arts, music and friends to hang out with. You guys are the BEST!]

END_OF_DOCUMENT_TOKEN_TO_BE_REPLACED

It’s been some time since my last blog post. Sol is now 7 years old and started at EtonHouse Malaysia International School in August 2019. So he has had one full year (including lockdown online learning) away from homeschooling. This school runs from kindergarten up to Year 6. It’s a small school with a concerted focus on inclusivity, even if they don’t have all the fanciest resources compared to other International Schools in Malaysia.

We based Sol’s success in school being a) how enthusiastic he was to go everyday b) the level of communication that was given to us in relation to Sol in the classroom c) what individual support was offered to Sol and d) did Sol make any friends?

And we are happy to say that we have a resounding YES to all those questions.

Sol started in a Year One classroom even though he had completed a Year One program at home. We discussed with the school that we felt a successful start for Sol would be where he felt comfortable with the learning and that if the need arose, we would move him on to Year Two after 6 months. Sol’s Homeroom teacher and Assistant teacher were both amazing with Sol – so loving, caring and fun. This made going to school every day a non-issue. Sol knew that he was cared for in the classroom.

Sol’s teachers and the Inclusive Team held meetings with us to discuss Sol’s progress and goals. They asked us what goals we felt were important for Sol and we believe that Sol’s social progress should be a priority. Sol still struggles somewhat to translate facial expressions, vocal tone and body language in other children. This sometimes causes him to become more sensitive to a situation that is probably NO BIG DEAL or read the wrong cues and respond in a way that seems “off topic”. Sol does realise when he has messed up and attempts to fix the situation and this can occasionally make it even worse! You’ve seen the comedies where the comedian is trying to gain the attention of the love-interest and goes from bad to worse – that can be Sol too!

The individual support that Sol was able to access at school academically, was to swap his Mandarin classroom hours with extra literacy hours – this was GOLD! We saw Sol’s reading progress really well with this support. Granted we also spend time with him at home reading (and now it’s everyday), the fact the school was so flexible to his needs, without adding extra hours to his school day was appreciated.

As the school has such a strong inclusivity policy, this meant Sol was able to make friends in the classroom and maintain those friendships outside of the classroom. He still has a standing playdate with one of his buddies that has since left EHM. Sol is now in Year 2 and while he doesn’t yet have his one special buddy, he talks positively about a lot of the kids in his class and gets on with most of them.

School is a bit different under Restricted Movement Order – no outdoor play/recess and very structured movement around the school but it’s a relief to know that Sol is back in school, safe, learning and happy. Long may it last! Not the lockdown part of course……..